In October 2014, Dr. Samy El-Tawab attended the NSF Workshop on Large-Scale Traffic and Driving Activity Data (DriveSense ’14) in Norfolk, Virginia. Sitting next to him at the group dinner was Dr. Byungkyu “Brian” Park from UVA, who wondered out loud how many members were in the restaurant. Dr. El-Tawab suggested that they could count them by the number of cell phone signals and Dr. Park asked if the same thing could be done at a bus station. Dr. El-Tawab assured him that it could.

The chance meeting led to their first 4-VA grant of $7,700 at JMU and $5,000 at UVA, awarded in the fall of 2015, called Improving Transit Bus Operations using Low Cost Bluetooth Technology. They decided to focus on the transit bus system since it’s a key component in achieving more sustainable urban transportation systems. The goal of the project was to increase bus ridership through better scheduling and route management.

The study consisted of two groups—one from JMU and one from UVA—who assessed local bus operation performance, such as waiting times at bus stations, using a low cost technology system such as WiFi. As a continuation of the study, 4-VA awarded the team $10,000 at JMU and $5,000 at UVA for Implementation and Data Collection for Improving Transit Bus Operations using Low Cost WiFi Technology in 2016 and an additional $5,000 for Development of Transit Bus Performance Monitoring System using Low Cost WiFi Technology and Cloud Computing in/out of James Madison University Campus in 2017.

JMU Transportation Demand Manager Lee Eshelman and the Harrisonburg Department of Public Transportation are excited about the success of the project and would like to see data nodes installed at each bus stop across the JMU campus (18 bus stations) and near off-campus housing to improve operations at JMU. 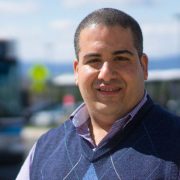 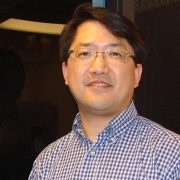 The project was the technical high point of my college career and is certainly the experience I value the most.

After putting this project on my resume, I saw the number of online views of my resume increase significantly, as well as the number of interviews and job offers I received. I knew that this project would give me an edge over some of my competition in the job market and I definitely attribute it to helping me to take a full time position at a very well respected telecommunications firm.

Andrew FunkhouserISAT, Class of 2016 at JMU

Benefits to the Commonwealth

Because these cookies are strictly necessary to deliver the website, refuseing them will have impact how our site functions. You always can block or delete cookies by changing your browser settings and force blocking all cookies on this website. But this will always prompt you to accept/refuse cookies when revisiting our site.